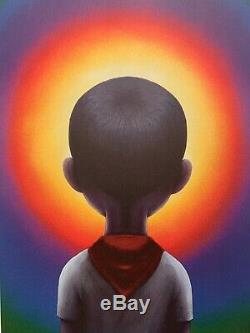 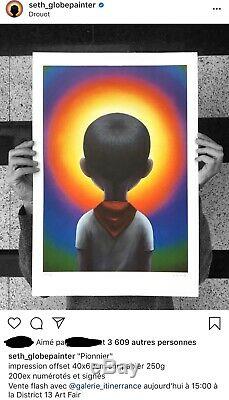 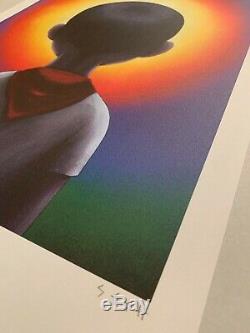 Technique : Offset HUV offset paper on 250gr/m². Edition : 200 pieces, numbered can change one to another. The Pionnier lithograph is a Seth historic piece that will increase in value.

In the mid-90s, Julien Malland begins mural painting in the 20th arrondissement of Paris under the name of Seth. He makes himself known among Parisian graffiti artists by creating characters. Together, they founded Wasted Talent, a publisher specializing in monographs from urban artists. Since then, he has been compelled to draw simple characters, mostly children, somehow connected to the chaotic environment in which they are revealed. Witnessing the outcome of globalization, its creations are celebrating traditions, defining a hybrid culture between modern expression and traditional representation. His approach aims to arouse an artistic dialogue, whether it is a collaboration with local urban artists or a learning process of traditional techniques from local craftsmen. In addition, Seth is the author and director of Les nouveaux explorateurs, a TV serial show produced by Canal+ that he presents himself, each show focusing on a country and its local mural artists. His travels during the last two years are narrated in , a book he authored, Extramuros. Julien Malland, aka Seth, was born in Paris in 1972. Painter, reporter, publisher, graffiti artist, multi-talented, he is inspired by his travels and popular culture to create colorful and poetic walls.

A true "Globe Painter, " Seth offers street art audiences a journey around the world. Julien Malland becomes Seth in the 90s, when he begins to paint in the streets of Paris. "I discovered street art and graffiti in 1996 with friends, " he says.

I immediately started drawing characters. My friends were doing lettering, but I was very bad at it. His characters are inspired by the hip-hop world of the moment.

The same year, he published a book now a classic: "Kapital". Alongside Gauthier Bischoff, he invented all the artistic styles of street art. Together they create the publishing house L'Oeil d'Horus and the Wasted Talent collection dedicated to graffiti. In 2003, Seth embarked on a nine-month world tour that will radically change his perception. Share artistic experiences with street artists from different cultures.

He leaves his mark at each stopover of this trip and draws a new book "Globe Painter", in the form of a logbook. A book rewarded in 2007 at the Clermont-Ferrand Travel Notebook Festival. "I found it interesting to tell a trip through the mural, " he recalls. He was then contacted by Canal + to produce a series of reports on urban art for the program "Les Nouveaux Explorateurs".

"The idea was to discover a country through street art, not necessarily or only street art, " he says. Since 2011, Seth works mainly alone to create its walls and also paints on canvas. His style is refined and spreads in the streets.

He looks for walls that address directly to the spectators, in their environments. I try to adapt, to tell a story about the city, instead... Deliver a message, sometimes hidden, in any case a message that is not always noticeable at first glance. A message or a free interpretation that the poetry of drawing suggests.

For everyone to make their own reading of Seth's painting. Moreover, the artist sees himself more as a public painter than a street-art artist. In street art, there is the dimension of protest, illegality, the Banksy. When I travel, I will also see artists who paint on the street, craftsmen who make letterings for concerts... For Seth, street art is a more global discipline.

Inspired by the Italian comic book author Hugo Pratt or the dreamlike and childish world of Japanese director Myazaki, Seth also admires the work of Brazilian artists Os Gémêos who highlight the traditional culture of their country. His pictorial imagination is mostly linked to childhood. As if childhood was the way to tell everything.

But if I started painting children, it's because when you travel, you see it everywhere in the street! If his art is more naive and colorful on the walls of cities, on canvas his paintings are now darker. A response to his pessimistic view of the world. In the street, we have a greater responsibility. My concept is not to shock people or to challenge them but rather to awaken their kindness, he says.